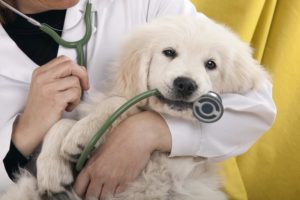 Heartworm is an insidious disease that has spread to virtually all parts of the US and many parts of Canada since the early 1970s. It is spread only by mosquitoes; thus, areas heavily populated by these insects tend to have a greater incidence of heartworm disease.

Heartworm can strike both dogs and cats, although it is much more commonly seen in dogs. As its name implies, heartworm lives in the blood of a dog’s or cat’s heart and adjacent blood vessels. The adult heartworms living in the heart produce offspring, called microfilariae, which circulate in the infected animal’s blood.

Canine Heartworm
Veterinary research has resulted in medications and procedures that have improved the treatment of canine heartworm disease. Prompt detection and early treatment are vital to a successful cure.

Highly effective diagnostic testing and preventive medications have been developed in recent years. It is necessary to have a heartworm test prior to using a preventive. Severe or fatal reactions may occur if preventives are given to dogs with heartworm disease, or may create diagnostic confusion at a later date.

A small amount of blood is all that’s necessary for a preliminary heartworm screening test that is very accurate in detecting the presence of heartworm. In many regions, this may be the only test needed before starting a preventive program. If the dog shows heartworm symptoms or has visited a known heartworm problem area, additional tests are recommended before a preventive or treatment program is started.

Common blood screening tests can verify the presence of heartworms. Radiographs or X-ray films and other sophisticated laboratory tests are used to detect heartworm disease. Canine heartworm disease symptoms include:

In many cases, there are advanced symptoms. Some dogs do not appear to have symptoms in the early stages.others do. If not detected and controlled with proper treatment, heartworm can lead to congestive heart failure and death.

As a safeguard, many veterinarians recommend annual or biannual screening tests even for dogs that are on heartworm preventives. In known heartworm areas, or if dogs are traveling into these areas, veterinarians usually prescribe preventive medications. This medication prevents the larvae from developing into adult heartworms. Prescribed medications must be given as directed.

Today, the majority of dogs with heartworm disease survive. Most are cured by medications. Some require surgery. Prompt detection prevents needless suffering.

Feline Heartworm
Although heartworm is seen less frequently in cats, the disease poses a much greater danger. The outcome is often fatal.

There currently are no drugs approved for fighting heartworm in cats. Cats can be treated with canine medications, but this can lead to dangerous side effects, including lung failure and death. Another approach to battle the disease is by treating the symptoms, with hopes of the cat outliving the worms (heartworms live within a cat for about two years). However, this approach can result in sudden death as the worms exit through the pulmonary arteries to the lungs.

There are no consistent clinical signs of heartworm in cats. Common clues include coughing and rapid breathing. Other signs include weight loss and vomiting. However, all of these signs are also common in other diseases. Diagnosis is difficult for veterinarians and may include outside laboratory tests, radiographs, and ultrasound studies.

The good news is that there are heartworm prevention drugs available for cats. If you live in a heartworm infested area, or plan on visiting a heartworm area with your cat, your veterinarian can prescribe a preventive medication. These drugs are given once monthly and are very effective in cats and kittens.

Research continues into all phases of heartworm disease. For the latest advice, consult your veterinarian.