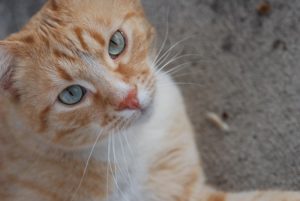 Most cats become infected with FIV when they are bitten while fighting with an infected cat. The virus, present in the saliva of infected cats, passes beneath the skin of the victim when it is bitten. Once it is in the body, FIV infects cells, replicates, and spreads to new sites via blood vessels and lymph channels.

Most FIV-positive cats have a history of cat fights and bite-wound abscesses. Considering that bites are the primary mode of transmission, it is not surprising that cats at greatest risk of FIV infection are outdoor, adult males, who are most likely to engage in aggressive fights over territory.

A less common route of FIV transmission is from an infected mother cat (queen) to her kittens. Infection can occur in the uterus during pregnancy, through ingestion of virus-laden milk after birth or possibly as the kitten is delivered.

Not all kittens born to FIV-positive cats become infected with the virus. The reasons for this are not well understood although it appears that several factors may be involved, such as the strain of FIV and the health status of the mother cat. One FIV-positive queen might have a litter with no infected kittens. In some cases, litters may include some kittens with FIV and some without. This is an area of active research, and there are still more questions than answers.

Cats can also become infected with FIV if they receive FIV-positive blood or blood components in transfusions. However, the risk from blood transfusions has lessened considerable since reliable FIV diagnostic tests have become widely available. Today blood donor cats should be routinely screened for infectious agents.

FIV is rarely spread through casual contact (by sharing food and water bowls or litter pans, by airborne germs, or by mutual grooming). However, extremely sensitive, sophisticated tests have detected FIV proteins in some previously uninfected cats that had been living with positive cats for long periods. These “hidden” infections presumably occurred even though the cats did not fight. Although the affected cats had FIV proteins in their bodies, they did not test positive for FIV infection using routine blood tests and so far have not developed clinical signs of FIV infection. Therefore, the full implications of these observations are still unclear. However, casual FIV transmission must considered a possibility.