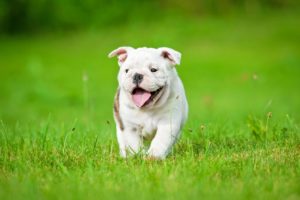 Housetraining your new puppy can be easy and effective if you dedicate the necessary time and patience. A successful plan includes supervision, confinement, and encouragement.

First step: Teach your puppy where you want it to eliminate, by accompanying it every time it goes outdoors. Choose a specific location with easy access. The area will soon become a familiar spot as the pup recognizes odor from previous excursions. Mildly praise any sniffing or other pre-elimination behaviors. When the puppy eliminates, praise it heartily.

Controlling your puppy’s feeding schedule provides some control over its elimination schedule. Most will eliminate within the first hour after eating. Because of this, it is best to avoid feeding a large meal just before confinement. Offer food two or three times each day at the same times, and make it available for no longer than 30 minutes. The last meal should be finished three to five hours before bedtime.

It is also important to take it outdoors after playing, drinking, or sleeping. By scheduling feeding times, play sessions, confinement periods, and trips outside to the “toilet” area, you will accustom your puppy to a relatively predictable elimination schedule.

The most challenging part of the housetraining process is preventing the pup from eliminating indoors. Until the puppy is housetrained, you will need to provide constant supervision. When you are unable to supervise, confine the pup to a relatively small, safe area. Always take your puppy out to eliminate just before confinement. A wire or plastic crate provides an excellent area in which to keep the puppy when you cannot observe it. (See the article on crate training.)

If the puppy is home alone each day for long periods, restrict it to a larger area such as a small room or exercise pen. The area should provide enough space for the puppy to eliminate if necessary and rest several feet away from a mess. Place paper at the sites where the puppy is likely to eliminate. To associate good things with the confinement area, spend time in the area playing with the puppy or simply reading nearby as it rests there.

Returning to the Scene of the Crime

To discourage the puppy from returning to previously soiled areas, remove urine and fecal odor with an effective commercial product. If your puppy begins eliminating in certain areas of the home, deny access by closing doors to the rooms, utilizing baby gates, or moving furniture over the soiled areas. Most pets prefer to avoid eliminating in areas where they eat or play. Feeding or placing water bowls, bedding, and toys in previously soiled areas can discourage elimination.

No puppy has ever been housetrained without making a mistake or two. Be prepared for the inevitable. Punishment is the least effective and most overused approach to housetraining.

A correction should involve nothing more than a mild, startling distraction and should be used only if you catch the puppy in the act of eliminating indoors. Immediately take the pup to its elimination area outdoors to finish. A correction that occurs more than a few seconds after the puppy eliminates is useless because it will not understand why it is being corrected. If the punishment is too harsh, your puppy may learn not to eliminate in front of you, even outdoors, and you run the risk of ruining your bond with it. And don’t even think about rubbing the pup’s nose in a mess. There is absolutely nothing it will learn from this, except to be afraid of you. Some pets will squat and urinate as they greet family members. Never scold them. This problem is due typically to nervousness or excitement, and scolding will always make the problem worse.