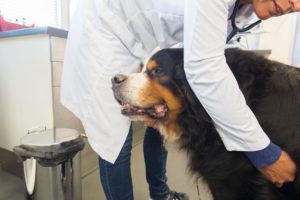 Ticks are such small insects, but they can pose a very great danger to us and our companion animals. They prey on the blood of dogs, horses, deer, birds, rodents, and people. There are hundreds of kinds of ticks, including the dog tick and the deer tick.

The diseases that ticks can transmit to companion animals include Lyme disease, Rocky Mountain spotted fever, ehrlichiosis (a bacterial infection), and babesiosis (a blood disorder).

Ticks live in cracks and crevices in the home or outside in vegetation, such as grassy meadows, woods, brush, and weeds. They cannot fly or jump, but they have a way of finding a host. Oftentimes, they will wait in wooded or grassed areas and attach themselves to any living creature that brushes them. Ticks can also detect the carbon dioxide given off by warm-blooded animals. They can crawl several feet to the carbon dioxide source.

Lyme Disease
The first human outbreak of Lyme disease was identified in Lyme, Connecticut, in 1975, when an unusually large number of cases of arthritis resembling rheumatoid disease occurred within a small geographic area. Studies concluded that dogs from the same location also developed arthritis similar to that in human Lyme disease. Although Lyme disease is an illness common to humans and animals, there is no evidence that it can be transmitted from one to the other.

Clinical signs of Lyme disease in pets include loss of appetite, lameness, lethargy, and fever. Scientists believe the disease can affect humans for a long time, causing problems to the joints, heart, and central nervous system.

Lyme disease vaccinations are available for dogs. If you live in an area that is prone to Lyme disease, consult your veterinarian about the availability and use of this vaccine.

Antibiotics are effective if the disease is caught in the early stages. Improvement in the animal’s health is usually seen within the first 12-24 hours. Once an animal has recovered from this disease, it is probably immune for up to 12 months. However, re-infections can occur if the animal is re-exposed.

Tick Paralysis
Female ticks release a toxin while feeding that causes tick paralysis. The toxin affects the nervous system and can cause weakness and even paralysis that develops 7-9 days after the tick attachment. The signs can vary from a mild form of unsteadiness of all four legs, to acute quadriplegia that leaves all four legs completely immobilized.

Tick Removal
At times, ticks can be difficult to find. Common places to find hidden ticks are the head, neck, ears, or feet. The longer a tick is attached to its host, the greater the chance for disease. If you find a tick, remove it immediately with tweezers. To protect yourself, wear gloves and do not touch the tick. Carefully grasp the exposed section of its body near the pet’s skin. Gently pull until the parasite lets go. You can help prevent inflammation by applying antiseptic onto the bitten area.

To dispose of the tick, wrap it in several tissues and flush it down the toilet. Or, you can drop it in a small container of rubbing alcohol (ticks won’t drown in water). Do not crush, burn, or suffocate the tick–this may spread the infectious bacteria.

Preventative Care
Dog owners should inspect their dogs regularly for ticks, especially after trips outside to the woods or mountains. By thoroughly combing your dog within 4-6 hours of exposure to tick-infested areas, you can help prevent ticks from attaching to your dog.

Your veterinarian is the best source for more information on the dangers of ticks in your area. Your veterinarian can recommend tick repellents that are available to help ward off tick infestation. When numerous ticks are found, contact your veterinarian for advice on insecticidal bathing or dipping.